How Many Men Does It Take to Fly an UNMANNED Aircraft? 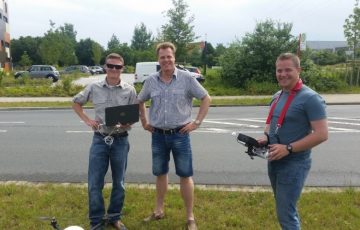 The other day I was looking at the website of a major drone, or UAS (unmanned aircraft systems), company and something just didn’t seem quite right. I opened another browser and compared it to a different UAS company. It, too, felt strangely misleading.

Then I realized what it was. There are no people in the photographs. Like some sort of apocalyptic vision from a Terminator film, the marketing literature of UAS companies implies that the future of aviation is completely robotic. I have to admit, the thought sent a shiver up my spine.

Is that really what the drone industry is working towards? In some circles the answer is yes. According to this philosophy, taking people out of the cockpit has two major advantages. The first is that you don’t have to hire a pilot so there is reduction in price. The second is that it is actually safer.  Machines don’t make human errors and nobody dies onboard if the plane crashes.

First, if you go out to the field on a UAS flight, you should notice several people with various responsibilities. The most obvious one is a pilot (who will probably be called an operator in the near future – that’s another blog topic). While he or she is not in the cockpit, their responsibilities are nearly identical to those of someone sitting in the first seat of a manned aircraft. They plan the mission, communicate with air traffic control, monitor for emergencies, and generally take responsibility for the situation. You should also notice other people around assisting the mission, including observers who help monitor the airspace and maintain visual contact with the aircraft.

Aside from the flight crew, the flight is supported by compliance officers, aircraft mechanics, air traffic controllers, data processing specialists, and trainers; the same functions you might have supporting a manned aircraft operation. Indeed, a commercial unmanned operation requires nearly the same number of people as a manned operation. Sort of ironic.

Secondly, the issue of safety is interesting. There might be less risk of death to the operators of drones, but, we won’t really know for quite some time. Manned flights are by far the safest mode of transportation (excluding the elevator which has proven over time to be an amazingly safe invention). But, many drone operators tend to take the safety for granted. Because personal harm seems diminished, untrained pilots seem willing to take far greater risks with their systems. As a result, the crash rate has been exceedingly higher than for manned aviation. Will those crashes eventually cause significant harm?  Who knows?

Unmanned aircraft have many advantages in certain situations.  They can perform operations that are not possible with manned aircraft, adding huge value to our society.  Operating with Standard Operating Procedures, proficiency in flight, and good maintenance of the system are keys to the future of the industry.  All these tasks are managed by people. How many men does it take to fly and unmanned aircraft? For the foreseeable future, probably more than you think.