"The combination of terrain, wind gusts, thin air and altitude fatigue made this the most extreme UAS flying ever accomplished on a commercial project anywhere in the world" Jeff Cozart, Juniper Unmanned CEO

A mineral exploration company believed a rock-strewn ridge high in the Rocky Mountains could contain porphyry copper deposits. Confirming the presence of this valuable metal orebody was difficult due to challenging conditions. In less daunting environments, a magnetometer would be mounted on a vehicle or small manned aircraft to pinpoint possible locations of the metallic deposits. The rocky ridge, however, made these options neither safe nor practical. Situated at an altitude of 11,700 to 12,200 feet above sea level, the bowl-shaped ridge (called a cirque) was composed of loose rocks on a slope with a 39% rise, making it impossible for wheeled vehicles to traverse. Jutting outcrops and howling winds rendered the site too dangerous for manned aircraft. On foot, a field crew could theoretically carry the magnetometer, but this would take months or years, endangering the personnel and yielding incomplete results. 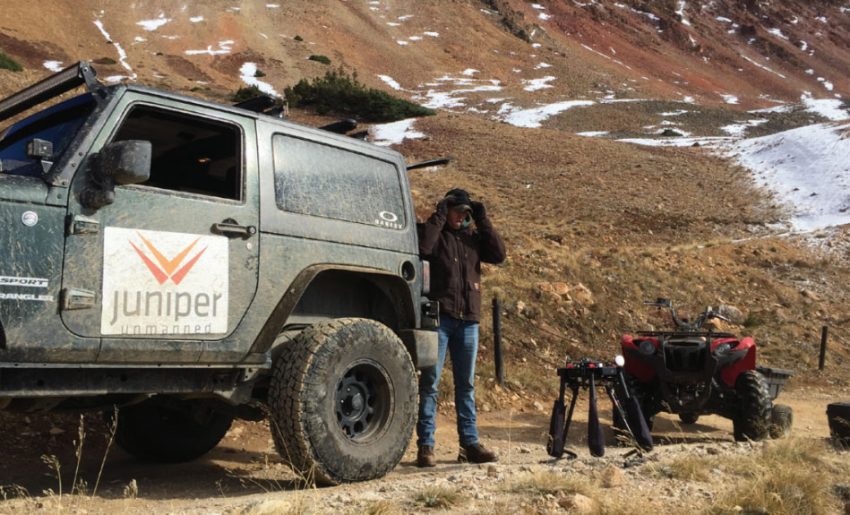 Juniper Unmanned team preparing to fly the magnetometer to over 12,800' in elevation

Juniper Unmanned accepted the challenge of flying an experimental magnetometer in the most demanding flight conditions ever faced by a UAS. The MagArrow™ sensor, developed by Geometrics of San Jose, Calif., would be hung by tether beneath the DJI Matrice 600 six-rotor drone to avoid electronic interference between the device and airframe. Juniper’s exhaustive pre-flight preparations focused on dealing with the altitude and terrain. The Matrice 600 was outfitted with high-altitude rotor blades, certified for flights up to 14,700 feet – nearly the density altitude on the day of the first flight. The preparation by Juniper Unmanned’s professional crew also included loading a digital elevation model (DEM) of the 100-acre site into the flight control software. This would enable the UAS to safely follow the terrain at a constant altitude above ground level of only 100 feet, a height deemed necessary to capture accurate magnetic data. Crew safety is standard operating procedure on all Juniper missions. Prior to the project, personnel received training in recognizing hypoxia in themselves and others. Oxygen tanks were used by the pilot as a precaution during the flight. The crew included three spotters positioned around the ridge line to radio the pilot when the drone flew too close to the ground. 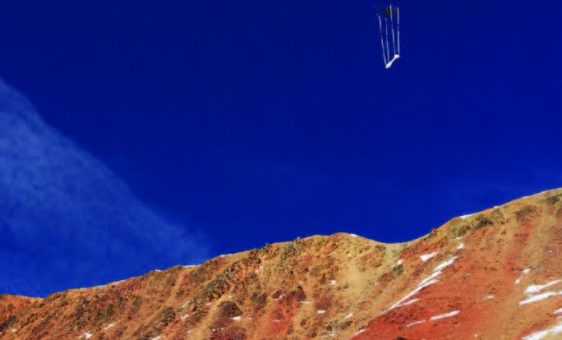 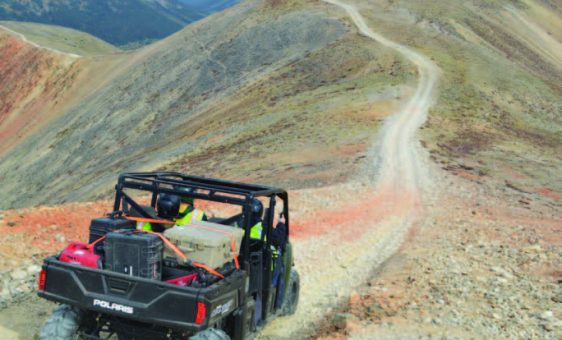 Traveling to the launch site for the magnetometer survey 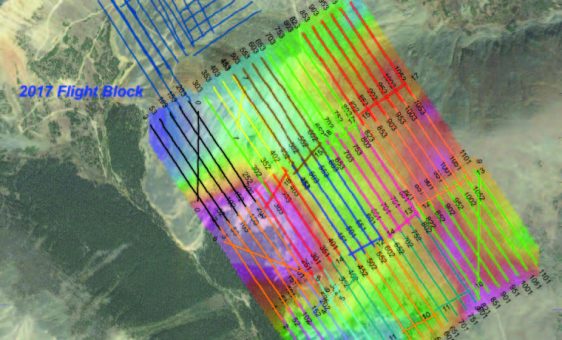 Flight blocks from the 2017 and 2018 collection projects

Juniper successfully mapped the initial 100-acre project area with the magnetometer on the first day and was asked by the client to return months later to map a second larger site on the opposite side of the cirque. Both acquisitions were successful at capturing data without injury to personnel or damage to equipment. At the end of each flight line, the UAS was carefully landed and the magnetometer data was downloaded wirelessly to a mobile phone for delivery to the client. Each data set contained magnetic intensity measurements in .txt files, along with GPS from the sensor and GPS/IMU data from the drone. Juniper Unmanned processed this data along with its partner International Geophysical Services to create total magnetic intensity (TMI) maps of the two exploration sites. Anomalies on these maps indicated the possible presence of porphyry copper deposits. Interpretations of these maps were not shared publicly, but the client expressed tremendous satisfaction with the first UAS magnetometer mission of its kind.