EPC contractor RES Americas (Renewable Energy Systems) had begun mobilizing its earthmoving machinery to the site of an 86-square-mile (55,000 acre) wind farm project when it quickly identified issues with the third-party designed plans. The original plans called for 22 miles of dirt access roads to be graded to accommodate 90 turbine sites. At each turbine location, up to eight feet of overburden had to be removed for foundation construction, followed by backfilling around the completed pad. According to the original design, the entire cut-and-fill operation would create a surplus of 5,000 cubic yards of dirt, which RES was prepared to truck offsite.

RES’ quality control procedures identified clear problems with the original plans during testing and through surveying spot checks. The designs were not correct, most likely having been generated from inaccurate elevation models. Due to the schedule, RES needed a new site survey performed quickly but with the accuracy to make precise cut-and-fill calculations and generate new machine control points to guide the equipment.

LW Survey Company, a surveying and mapping firm, submitted a proposal to perform a traditional field survey with GPS units, but required up to six weeks to complete it. The cost of keeping heavy machinery idle for this period made the idea impractical. LW Survey Company recommended Juniper Unmanned and UAV LiDAR as a faster option. 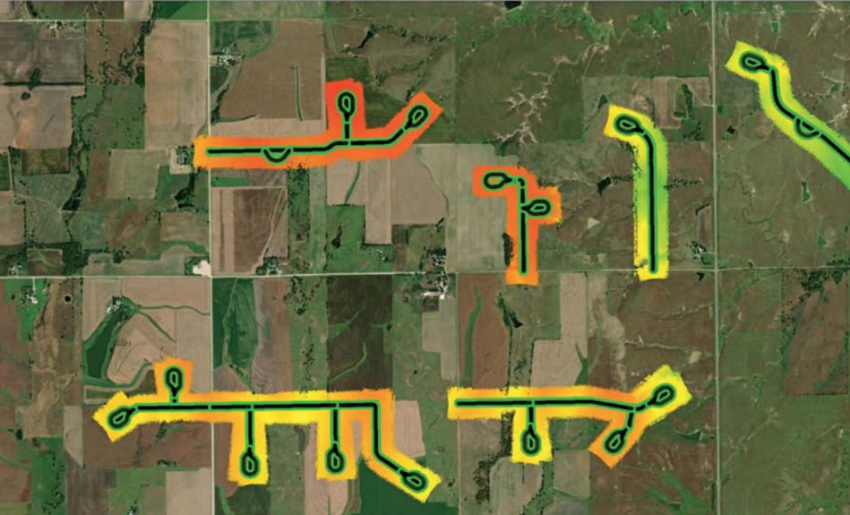 Arial imagery with the customer required Area of Interest (AOI), including the identified roads and wind turbine pads. This was used for flight planning and QA/QC.

With an inventory of multiple airframes and LiDAR units, Juniper was available to deploy to the site within a few days of meeting with the construction managers. Understanding their need for bare-earth digital terrain models (DTMs) with 3-inch vertical accuracy – sufficient for generating 1-foot contour maps – Juniper opted to use the YellowScan Surveyor LiDAR scanner mounted on a Matrice 600 Pro UAV.

The M600 is a workhorse drone capable of providing a stable airborne scanning platform even in the windy conditions expected at the site. The YellowScan was selected because it is a powerful instrument capable of ‘painting’ the Earth’s surface with the high density of laser pulses required to penetrate vegetation and produce an accurate bare-Earth DTM.

As is standard operating procedure, Juniper arrived with site safety and flight operations plans in hand. The FAA had received appropriate notifications, and the client’s onsite crew was given safety instructions before the UAV lifted off. The flight lines had been planned to efficiently cover the proposed access roads and foundation locations, spread over 34 square miles.

Over the course of three days, the Juniper flight crew captured the airborne LiDAR data while a ground team shot 300 quick ‘check points’ with GPS units. A separate GPS was established as a base station. Once the LiDAR collection was completed, Juniper used the GPS data to perform Post Processing Kinematic correction to improve the native accuracy of the elevation measurements. The point cloud density exceeded 200 points per meter.

Juniper extracted the bare-Earth DTM from the point cloud and generated a 1-foot contour map of the site. This data was transferred to LW Survey Company to recalculate the cut-and-fill values for the entire project area. This firm also created revised GPS machine control plots to guide the Earth-moving equipment. 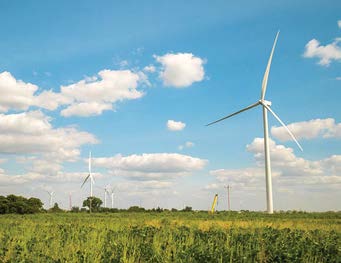 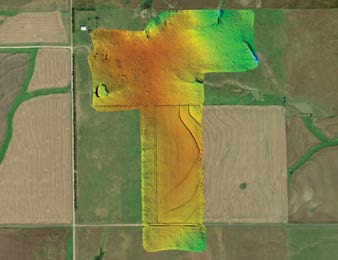 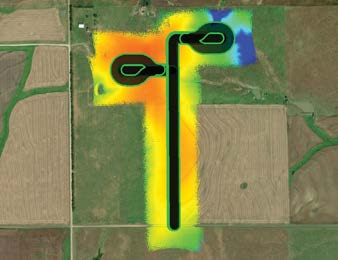 The required Area of Interest overlaid on top of a LiDAR point cloud which is colorized to show elevation. This image illustrates complete coverage for quality assurance

Just 10 days after arriving on-site, Juniper delivered the DTM, contour map, cut-and-fill values, and machine control data to the construction company. The results confirmed their assessment of the original design. Instead of producing a 5,000-cubic-yard surplus of dirt, the project would require 121,000 cubic yards of fill dirt to be brought to the site. This discrepancy could have cost the construction company’s client $1 million under the contract.

With the new cut-and-fill calculations, the client was able to re-negotiate its contract with the wind farm developer and resume Earthmoving operations within a matter of days.